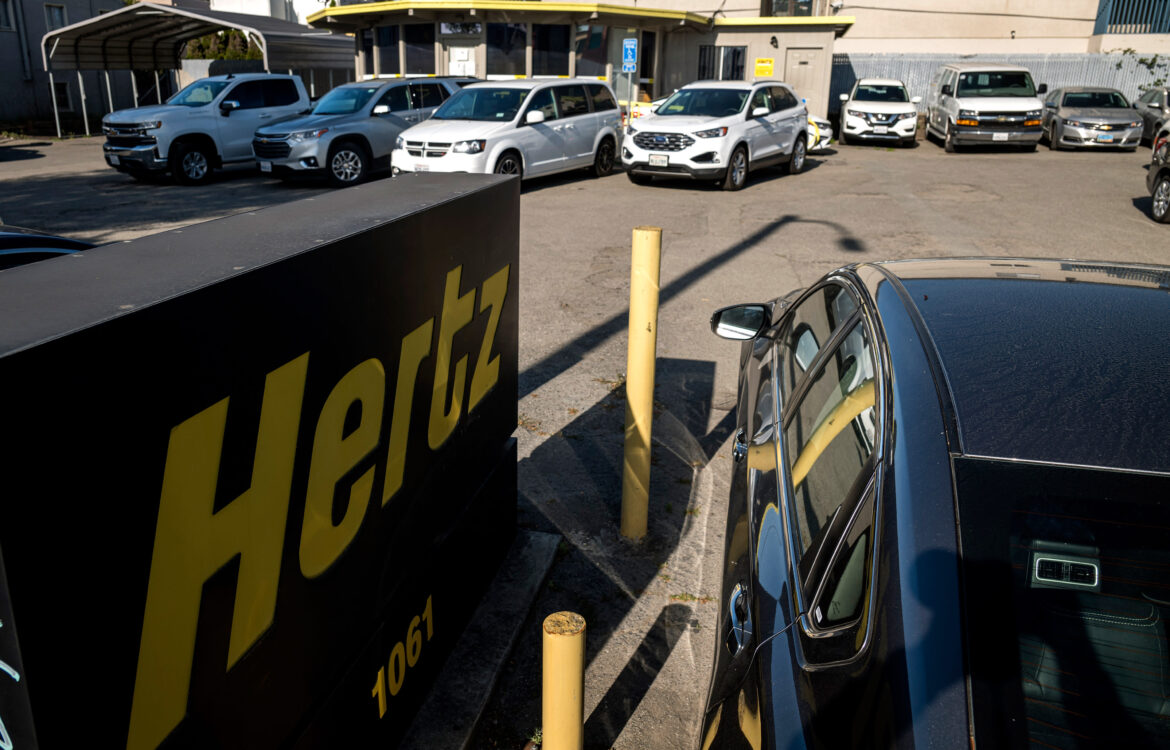 Signage for Hertz Global Holdings Inc. stands at a rental location in Berkeley, California, U.S., on Tuesday, May 5, 2020.

Ongoing distress in the rental car market due to the coronavirus pandemic, highlighted by Chapter 11 bankruptcy filings of Hertz and the parent company of Advantage Rent A Car in the past week, will place additional pressure on the already troubled U.S. auto industry.

New vehicle sales to rental car companies accounted for about 10%, or 1.7 million vehicles, last year. That demand came to a grinding halt due to the coronavirus crisis as Americans sheltered in their homes to stop the spread of the disease. Some analysts expect no more than 250,000 such sales in 2020.

“That’s where the majority of the risk is for the year,” said Jeff Schuster, LMC Automotive president of the Americas and global vehicle forecasts. He expects little to no sales to rental car companies for the remainder of the year.

Sales to rental car companies aren’t as profitable for automakers as those to dealers for individual customers, but they are a major lever for automakers to use to unload large amounts of vehicles. Companies such as Nissan Motor and the Detroit automakers particularly rely on daily rental firms for sales of hundreds of thousands of vehicles a year.

The rental car industry has historically been used to “dump” cars to achieve sales records or to reduce high inventory levels. But its importance for the U.S. auto industry is far more important than just that.

“While margins are very low on rental sales, they do increase volume and generate cash. Cash flow is the name of the game right now, so that will have an impact,” Schuster said. “That puts more pressure on plants to get up and running and build truck inventory for the retail market.”

The rental car industry also impacts pricing, profitability and residual values of individual vehicles for automakers. Such a rapid decline in sales could cause automakers to raise vehicle prices or discontinue vehicles that heavily rely on the rental companies, which could mean fewer jobs at U.S. plants.

“It’s pretty amazing how many facets of the industry could be impacted by, not necessarily the bankruptcies, but lower business travel, fewer rental and most of the rental car companies not needing to participate in the fleet side of the business,” said Tyson Jominy, J.D. Power vice president of data and analytics.

Ford started resuming vehicle production in the U.S. on May 18, 2020 with new coronavirus safety protocols such as health assessments, personal protective equipment and facility modifications to increase social distancing.

The rental car bankruptcies also could result in an influx of used cars flooding the already crowded used car market, impacting residual values of vehicles as supply outpaces demand. That could mean a good deal on a used car for consumers, however, a significantly lower value for trade-in vehicles for consumers and off-lease vehicles for financing companies. Lower values can damage auto brands and impact pricing on newer models.

Manheim, a major auto auction firm in the U.S., reported a “historic fall” in used vehicle prices as cars and trucks were coming off lease and not being sold. The firm reports prices are rebounding in May, but remain lower than a year ago.

“Once the used market doesn’t function properly, the new market really can struggle,” Jominy said. “It’s a really interesting dynamic the way one feeds the other.”

Rental car sales are particularly important for the Detroit Big Three automakers and Nissan, according to a recent investor note from Credit Suisse’s Dan Levy, citing industry data from WardsAuto InfoBank, J.D. Power and others.

General Motors, Ford Motor and Fiat Chrysler collectively accounted for about 56%, or 975,000 vehicles, to rental car companies last year. Fiat Chrysler led their crosstown rivals at 21%, followed by Nissan (20%), GM (18%) and Ford (17%). South Korean automaker Hyundai Motor, including Kia Motors, and Toyota Motor each accounted for about 11% of sales to rental car companies.

Sales to rental car agencies have historically accounted for the majority of fleet sales for automakers, which represented about 17%, or 2.9 million, of the 17 million vehicles sold in the U.S. last year, according to research firm IHS Markit. Fleet sales are those to rental car companies, government agencies and other commercial businesses.

Fleet sales for the Detroit automakers have significantly decreased in the past decade. For example, nearly 30% of GM’s sales in the late-2000s were to fleet companies, according to annual filings. In 2019, they only represented 16.1%.

Levy described the impact of the Chapter 11 filing for Hertz, which also includes the Dollar and Thrifty brands, as “manageable” for the auto industry.

A larger blow would be if additional large rental firms such as Enterprise — the nation’s largest car rental firm — were to significantly cut purchasing for a prolonged time or go under. The privately held company has more than 2 million cars and trucks globally through its Enterprise Rent-A-Car, National Car Rental and Alamo Rent A Car brands.

“While Hertz has comparable share to Enterprise in the U.S. airport rental market, it is in comparison small in the off-airport market, where Enterprise holds ~75% of share,” Levy wrote.

The coronavirus and measures to stop it from spreading have devastated air travel demand in the U.S., which has significantly impacted rental car companies that rely on airport business. Covid-19 caused airline travel to plummet to the lowest levels since the 1950s, before the jet age, according to Airlines for America, an industry group that represents the largest U.S. carriers.

Demand is starting to recover but it’s still far off its normal levels for this time of year. Over Memorial Day weekend, the traditional kick-off of the peak spring and summer travel season, 1.2 million people passed through security checkpoints at U.S. airports, more than triple the levels of a month before but down 87% from the same dates in 2019.

Hertz filed for bankruptcy protection last Friday, followed by Advantage Holdco – parent company of Advantage Rent A Car, E-Z Rent A Car and several affiliate companies – filing for Chapter 11 late Tuesday. The companies cited the declines in travel devastating their businesses as reasons for their filings.

Due to the plummet in travel, auto research firm IHS Markit doesn’t expect any “solid recovery” for fleet vehicle sales, including rental, until 2022.

“Our base case scenario doesn’t envision business travel coming back until the last quarter of the year, and leisure travel coming back at some point in 2021,” said Guido Vildozo, senior manager of light vehicle sales forecasting for the Americas for IHS Markit. “Fleet has serious implications for the next year and a half.”